The National Commission for the Fight against Genocide – CNLG has started conserving the clothes that were worn by the victims of the genocide that took place in 1994 within Rwanda. 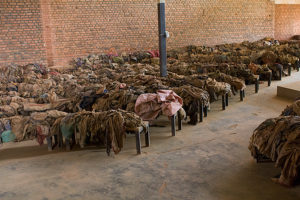 The US Embassy offered a fund of approximately $87,000 for Cultural Preservation and the good news is that this week the CNLG started preserving all the clothes that were worn by the victims during the genocide with works beginning at the Nyamata Genocide Memorial. This fund was offered to train staff on how the conservation will be done and this is goning to start at Nyamata were remains of around 45,000 victims are preserve and later extend to other memorials across Rwanda.

Jean-Damascène Bizimana the Executive Secretary of CNLG together H.E Erica Barks Ruggles the US Ambassador to Rwanda took a tour yesterday to access the progress of these conservation works.

This is done by machines known as “tumblers,” which carefully take away the outer soils layers, and also separate all clothing items. During this process, debris, dirt, soil as well as bones are separated from the clothing.

Once tumbling has been completed, the clothing are then well vacuumed

After vacuuming the clothes, they are then treated to ensure that all the microbes are killed.

Once the clothes have been treated, they are prepared for storage. These are kept in plastic boxes that are climate controlled. They are well packed with drying beans as a dehydrator and that way they can last up to twenty years. Onces stored, these clothes will be constantly monitor to check the humidity levels as well as control dust.

He added that during each of the steps the artifacts will be documented by capturing digital photographs of every piece of cloth and this digital evidence will be well kept within the Digital Clothing Inventory found at Nyamata Genocide Inventory.

The whole of last week was spent training the staff at CNLG on the different preservation methods, a session led by professional experts from US working at the University of Pennsylvania. This new development is surely going to preserve the memory of the 1994 Rwanda Genocide.

According to Dr. Bizimana these artifacts will last for a minimum of sixty years, and if the chemicals are regularly applied, they will last for even more years.

For information about visiting the genocide memorials in Rwanda, send us an email on info@gorillasafarirwanda.com