Following an increase in the gorilla permit prices for both the locals and the international tourists in Rwanda, it is expected the many people will no longer afford to go gorilla trekking. The good news is those tourists who cannot afford to pay the new price of $1500 per permit to visit any of the different gorilla families found in the Volcanoes National Park, you can use the virtual reality (VR) which gives you access within period of not more than five minutes.  The Virtual reality is some new technology that has been developed by Rwanda Development Board together with Africa Olleh Services which is an ICT service provider based in Rwanda. This new technology is set to be officially launched by the end of this month May or latest early June.

According to James Bang who is the Senior Manager of Africa Olleh Services (AOS), this tourism technology is intended to help increase the local and other visitors’ interest. And to also increase awareness about tourism attractions that Rwanda has. They intend to provide adequate tourism information about the different attractions and using this new technology to provide such information makes things a lot more interesting and thrilling, so said Bang during the prototype exhibition at the 2017 Transform Africa summit held in Rwanda’s capital Kigali.

For now, this VR technology is working on only three tourism aspects which include cultural tourism, the Kigali city tour and also gorilla trekking. Later it will expanded and cover attractions within Rwanda. Hopefully, this technology will improve and maintain on the performance of the country’s tourism sector following a vibrant growth and continuous expansion.

Despite the expansion, Rwanda has not yet exhibited its full tourism potential and it might not be that hard after all following the introduction of VR technology which is only part of a larger plan to develop a Smart Tourism Portal.  This process will involve collecting data from both the government service provider and those from the private sector so as to establish a tourism platform. 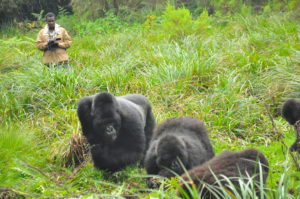 Bang said that this will call for time and also financial investment especially in services like the VR hubs and a center that will provide information. There is also need for more communication and collaboration between tourism companies in Rwanda and the tourists if we are to come up with a smart tourism platform to make tourism business easy and also none traditional so said Bang. He added that they are ready to install VR tourism booths in various key place across Kigali if the money is available and these places with include international airport, the different stadiums and also around the parks. Every booth is worth $300.000 and that is the small size.

At the moment, AOS has suggested that all VR content should be provided to the public through the RDB website where people can access it and download it. They will also be using social media networks like Face book videos, to make it easily accessible to everyone who is interested in using the VR devices.

This technology will be helpful following an increase of permits price from $750 to $1500 as announced by Rwanda Development Board (RDB) on 6th May 2017.  This change is affecting everyone including the foreign residents who originally paid $375 and Rwandan citizens were paying Rwf 30,000 only.